John Cooper – How He Revolutionised Motorsport and Inspired Mini Specialists 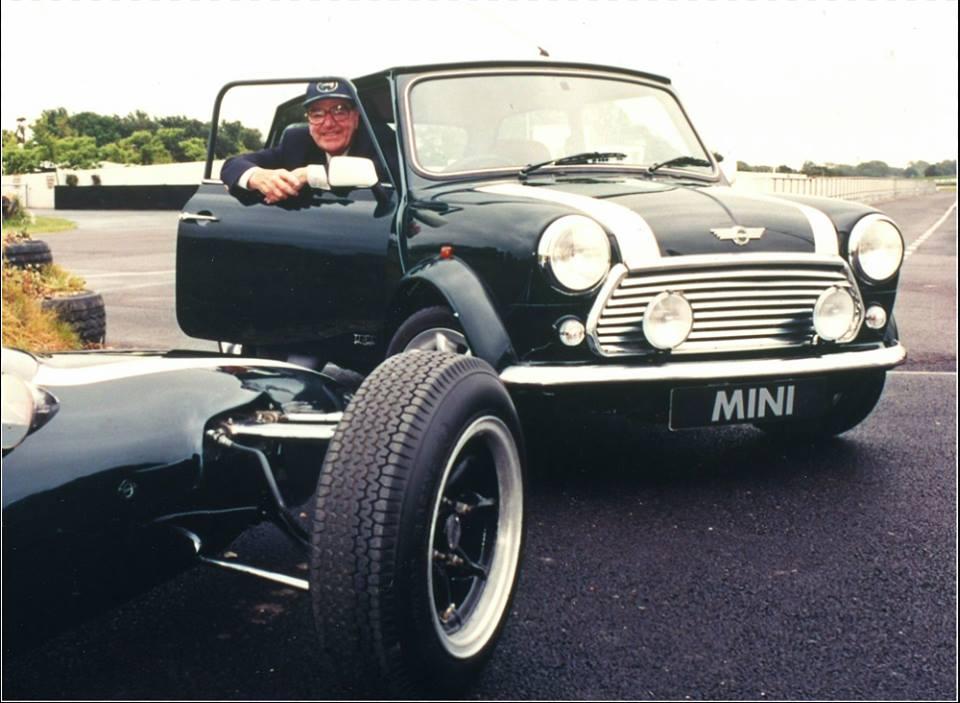 The 17th July 2022 will mark what would have been the 99th birthday of a major figure in the history of the Mini and Motorsport in general. John Cooper became an auto racing legend thanks to his rear-engined chassis design that would go on to revolutionise the sport at the very highest level – with Formula One and Indy 500 cars quickly adopting his work.

Of course, his company would also turn their hands to being Mini specialists; breathing new life into the Mini brand of cars and helping to grow the popular Mini racing scene. In celebration of his birthday, we’re going to look back at the extraordinary career of John and sum up his impact on racing and the Mini brand.

The Dawn Of Mini Specialists.

The name ‘Mini Cooper’ is synonymous with the Mini brand; for many people, the term is the first thing they think of when ‘Mini cars’ are mentioned. It all started during the very early years of the original Mini. John Cooper, who ran the Cooper Car Company along with his father, immediately saw the racing potential of this new economical car. Small, swift and able to get the most out of petrol tank, it seems somewhat obvious now that it would be perfect for racing.

John was friends with the designer of the original Mini, Alec Issigonis and later suggested to the British Motor Corporation (BMC) that he should be allowed to create his own, ‘tuned up’ version. Despite doubting that he would sell more than 1,000 models, the head of BMC, George Harriman, allowed John to go ahead. The final sales total of John’s modified Mini numbered more than 125,000. The Mini Cooper and an era of Mini specialists, customising their cars, was born.

A Big Name In Racing.

Of course, as an already established name in motorsport, John’s reputation for creating innovative cars preceded him. In 1955, long before being recognised as Mini specialists, his company first came upon the idea of creating a rear-engined sports car. The narrowing of the chassis and the slender bodywork of the cars (which left the suspension and wheels exposed), allowed for a Coventry Climax engine to produce a unique racing experience. This design was rolled out to their Formula Two cars, whose new design could also allow for an upgrade to Formula One if needs be.

Two years after the initial design, Jack Brabham, a soon-to-be Australian racing legend, joined the Cooper’s growing racing team; driving a 2-litre version of the Formula Two car. The first race for the pair was in the Monaco Grand Prix, finishing in sixth. The car impressed immediately; many marvelled at the rear-engined Cooper that ‘could challenge flat-footed Ferraris, Maseratis and Vanwalls’ that were already fixtures on the podium.

A year later, Stirling Moss won the Argentine Grand Prix in a Cooper; the win becoming the first victory by a car that had its engine in the back. Maurice Trintignant would win for Cooper-Climax at Monaco in the same season, beating two Ferrari’s to the win and establishing the brand as a mainstay in the sport.

With success in his pocket, John Cooper managed to persuade Coventry Climax to build 2.5-litre engines that would propel the Cooper team to two consecutive Formula One constructor’s championships in 1959 and 1960, with Jack Brabham winning the drivers’ championship on those occasions too. By 1962, every Formula One car had put their engines in the rear of the car – summing up John Cooper and his team’s impact on motorsport.

The Ongoing Success Of The Mini Cooper.

With the specifications of the Mark I Mini at his disposal, John Cooper and his team went about altering its different elements in order to create a vehicle that would offer a smoother driving experience for racers. The Morris Mini Minor engine was given a longer stroke capacity to 997cc (up from 848cc), as well as the addition of twin SU carburettors, a close-ratio gearbox and front disc brakes – which were rare in small cars at the time.

It was a later model, the Cooper S that sealed the iconic image of the Mini. A more powerful and sportier version of the original Cooper, the Cooper S featured a 1071cc engine that powered its drivers to Monte Carlo Rally wins in 1964, 1965 and 1967 (as well as helping Charlie Croker and Co get away from Turin with some gold bullion), before finding itself in plentiful use on Britain’s roads. By this point, the Mini was seen as the ‘car that got everyone who was anyone about’ and being the height of the swinging sixties, the glamour of racing fitted perfectly with this era.

Although he passed away in 2000, the legacy of John Cooper is still strong today – the ‘Mini Cooper’ brand is still around and producing new models. However for many Mini specialists, the appeal of the classic Cooper still holds true; many aficionados continuing his legacy by restoring, repairing or even customising their own cars to cruise around or to enter the rallying events that the original Mini Cooper was designed to do.

This is why here at Mini Sport, we are proud to be suppliers of Mini parts and spares for any classic Mini model. If you’re looking to improve the running of your vehicle, why not browse our extensive catalogue for more information and some fantastic deals on high-quality products?

Need To Learn More? Get In Touch With Our Mini Experts Today.

If you need any help or advice regarding your Mini or have any questions about any aspect of our services, then please do not hesitate to get in touch with us directly today. You can call our friendly Mini specialists on 01282 778731, or you can send an e-mail to us at sales@minisport.com