This would be the first event of the 2022 Mini Sport Cup Championship with no covid restrictions. With some of the regular competitors missing due to their Minis not being ready, it was still a quality field that entered.

Leading the Minis away would be favourite for the win, Ryan Taylor & Lucy Wilding, followed by Andrew O'Hanlon & Kevin Hogan. Making a return after a two year absence was Ken Pryce who was expected to go well, he was followed by Shane Gamble with Paul Kendrick sitting in as his regular co-driver could not make the event, Matt Davies was also also making a return, with his father’s regular co-driver Russell Joseph in the hot seat. With his dad unable to do the event, Craig King was hoping to continue to improve his stage times to get among the leading cars. Harvey Stevens & Andrew Selly were making their Dixies Challenge debut & were looking forward to competing on the challenging Epynt roads.

Craig King received a phone call at 7am on Saturday from Clare Jennings his co-driver to say she was not feeling well & would be unable to make the event. Luckily, her dad - the current championship winning co-driver Anton Bird, was moved into the co drivers seat.

Crews who were staying close to each other met for the pre-event get together at the local pub also there were the HRCR team, I think some of the crews may had woken up with a heavy head, but a great night was had by all.

Sunday started wet which after the long dry spell left crews expecting the roads to be slippery.

It was fantastic to see Yokohama had sent Ronny Hinkson to over see how the Minis tyres were coping with the conditions, he spent the day watching the cars out on the stages & presenting the prize awards at the end. 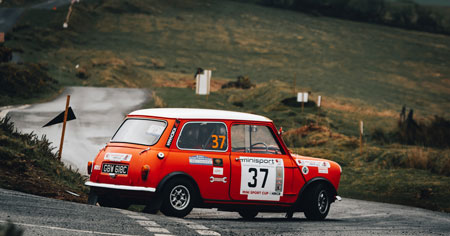 The crews made their way to the first loop of two stages and Ryan & Lucy started as they intended with quickest over both, followed by Ken & Don close behind.  The rest of the crew all made through without problems although the long lay off was having an effect where bravery and commitment get results.

Harvey had a miss fire that was diagnosed as a loose carburettor, Craig & Anton had a scare where they were flat out round a bend only to be presented with a substantial straw ball, which Anton had missed on the notes. Matt was complaining of inconsistency with the brakes which the service crew bled. Shane had a high-speed spin which helped the heart rate, but managed not to hit anything.

Second loop followed the first two stages again Ryan extended his lead with Ken following. Everyone improved with confidence improving. Behind these Matt had improved, Andrew was in front with Shane, Craig & Harvey all close behind.

With rain falling and heavy mist descending the crews tackled the next batch of stages with Shane struggling with a stripped fan and bottom pulley loose which put them out.

Harvey had the brake pedal go long and discovered that the disk had worked loose when trying to fix it they stripped the thread then having to change the disc, but kept going.

The next stages we lost two more of the Minis.  First to go was Harvey where the linkage broke on the carburettor making him park up in the stage. Craig was the next to hit problems at the start of stage 8, before booking in to the control the car ran low on fuel. A disappointing end to their day as Craig had seen a real improvement on his performance. 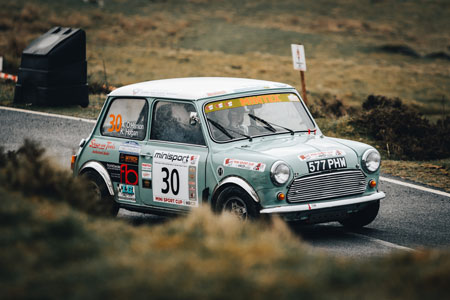 The sponsors prize draw gave two Yokohama tyres to Shane Gamble, Penrite Oil to Matt Davis & the Snap On prize to Harvey Stevens. The Questmead award for the improvement on seeding goes to Ryan Taylor.