The Rex Pet Hotel Flying Fortress Stages at an American WW11 air base was the third round of the HRCR Mini Sport Cup. With 7 Minis entered it was sure to be a good event!

First away was current leader Ryan Taylor with Lucy Wilding back in the co driving seat at car number 32, they were followed at car number 33 by current champions Clive King and Anton Bird back after a long lay off in their Mini Sport backed car.

Next away was Andrew O'Hanlon and Kevin Hogan at 38, followed by Shane Gamble and Bob Ward .

Craig King with Claire Jennings were just behind having fixed their broken exhaust manifold from the last event with Harvey Steven’s and Andrew Selly bringing up the rear.

The Stages planned had 20% on gravel which would be challenging running on our Yokohama control tyres, but everyone seemed up for the challenge.

Stage 1 was a baptism of fire, with big rocks on the gravel sections and rough concrete roads for the rest, first to hit problems were Ryan when his gear linkage broke, then the stage was stopped as a car had gone off.

Back into service Ryan retired as no replacement could be found, the cars were running hot getting up to 110 degrees and Clive discovered that the brakes had got so hot the rubber on the trackrod end had burnt. 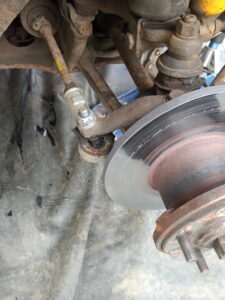 The later runners were run through the 1st stage only for Harvey to hit a tyre wall, as he extracted himself a drive shaft broke, but he managed to drive out with the help of his limited slip diff.

Craig had lost the intercom so completed the stage with nothing but hand signals!

The next few stages continued in a similar way; Harvey had replaced the drive shaft but Shane was the next to hit problems when he broke a drive shaft.

Clive had taken a small lead closely followed by Andrew but the dust was terrible if a car was caught was impossible to see the front of the car let alone the road.

Craig's Mini was suffering with the sump guard bent around the sump and the floor having holes appearing from the rocks, this was going to be survival mode for all of the cars.

Going into the last stage Clive and Anton had nearly 30 second lead from Andrew and Kevin,  closely followed by Craig and Claire who were nursing a broken bottom engine mounting, so had back off to achieve a finish.

Last stage Andrew's engine let go and he was out, Craig moved up to 2nd overall but suffered gear selection problems but managed to make it though.

But the win was taken by Clive and Anton who not only won the Mini Sport Cup, but the 1400cc Class as well, finishing finished 18th overall in their Mini Sport car!

The sponsors prize draw gave two Yokohama tyres to Clive King, Penrite Oil to Andrew O'Hanlon & the Snap On prize to Shane Gamble. The Questmead award for the improvement on seeding goes to Craig King.