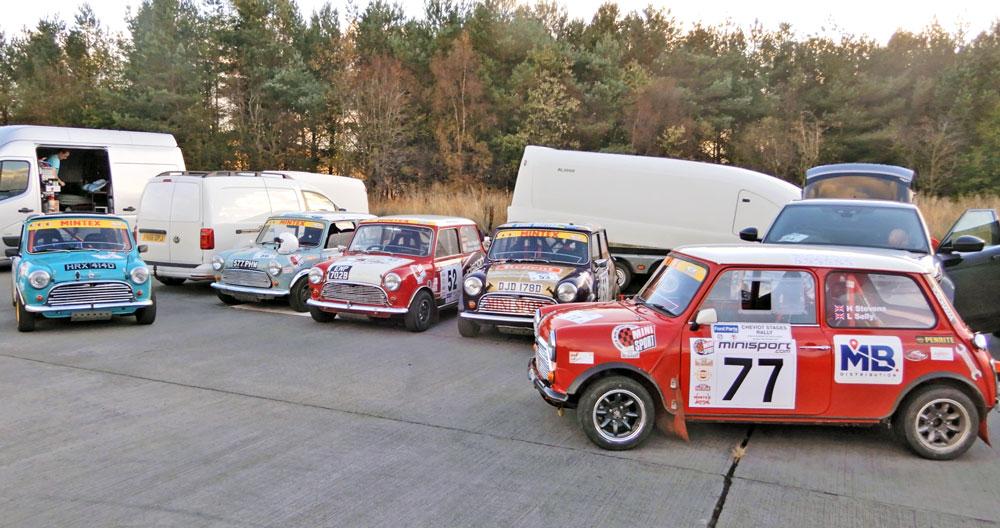 Sunday 24th October saw 6 of our Mini crews gear up to compete in the Ford Parts Cheviot Stages Rally for the 4th Round of the 2021 HRCR Mini Sport Cup!

Competing over the course 13 stages on the notoriously difficult Otterburn Ranges, our Mini Sport Cup crews had a battle on their hands to grab poll position & Class honours up for grabs! 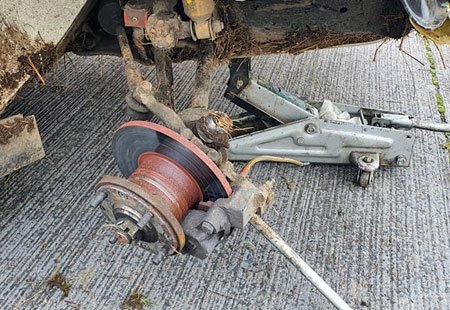 The Otterburn Ranges claimed their first victims relatively early on, with Craig King & Clare Jennings being forced to retire on Stage 7! Craig added that, "Unfortunately the Cheviot stages were not very kind to us this year... We got off to a brilliant start, our times were exactly where we hoped & the car was running faultlessly."
It was not to be for the crew though, as Suspension issues arose - "Then towards the end of stage seven, whilst flat out in 4th gear, our tie rod let go! This caused a catastrophic failure of the whole drivers side front suspension assembly, resulting in the brake hose being severed, the bottom arm bending, the top ball joint shearing & the driveshaft being pulled apart. The sudden break caused us to veer uncontrollably off the road & into the soft verge at approximately 80mph! Thankfully the car didn't dig in or roll over, but we both were convinced that it would. It's the biggest accident I haven't had. Thankfully Clare & myself were unhurt, but it was the end of our rally."
A disappointing & terrifying end to the event for Craig & Clare, however what a relief that they were able to walk away unscathed!
Craig King & Clare Jennings retired S7 - Suspension issues.

First time outing on the Otterburn Ranges for the Stevens Selly family team would see Harvey behind the wheel, Andrew on the Notes & Lawrence on the Spanners & Kettle!

Knowing the reputation of the event a nervous start would be guaranteed & was made all the worse with the weather forecast predicting rain... Having studied as much in-car footage of Mini Sport teams on previous events, the Recce just further illustrated how fast & tricky the narrow undulating & twisty the Otterburn roads could be.

Harvey went on to explain that, "The morning of the Rally started with the inevitable light rain & horrible greasy conditions. A steady & cautious start would be the order of the day for us!

Andy got to grips with reading out lots of info at a rapid rate & I tried to process it as best possible. The cautious start would mean we were languishing last of the six Mini's but had avoided any 4x4 antics of the moors... Unlike Shane & Bob who were lucky to have the local rambling society on hand to push them back on the road!"

As the day progressed the weather began to improve along with the teams confidence, with Harvey noting "The stage times started to reduce & we began to enjoy the benefit of the recent power upgrades made to the car. As the sun began to shine & everything was heating up, including the challenge for places, the brakes decided to overheat & boil the brake fluid. A loss of braking capability was improved by a fluid bleed at service but the extent of air contaminated fluid in the system would mean that the brakes required a degree of cadence application for the rest of the day."

The teams confidence took a further hammer blow having had a front row seat in witnessing the car 76 (Craig & Clare) crash. Slowing right down to check on their friends & fellow competitors Harvey & Andrew were elated to see both Clare & Craig out the car giving a healthy thumbs up & OK board..."

With the crew taking the next stage a little more cautious, before picking back up the pace in the later stages to set some competitive times against the other Minis.

Harvey explains that, "Given the lack of internet access on the range and not knowing what would be required to overhaul Andrew & Kevin in the other Cat 2 Mini the team conceded that it was  probably a bridge too far & opted for a solid no heroic drive to the finish. Thrilled to be able to complete the event & enjoy the praise from the more experienced teams the Stevens & Selly Crew will reassemble & look to put in a big charge on the last event."

Current Category 2 Class leaders, Andrew O’Hanlon & Kevin Hogan had a day of mixed fortunes on the Otterburn Ranges. Having suffered a blown head-gasket & handling problems, caused by a broken rear shock absorber, on the recent Pokerstars Rally on the Isle of Man, the pair were hopeful of less drama this weekend. 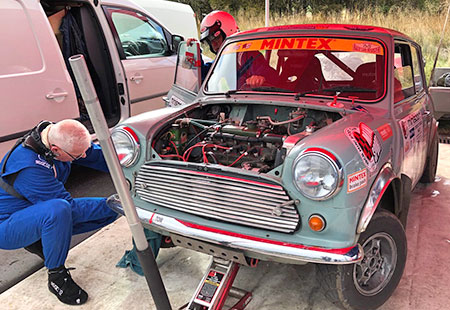 Unfortunately, things didn’t quite go to plan! Kevin explains that, "It had been some 30 yrs since I had last been over the Ranges competitively & it was taking a little time to get back into a good rhythm with the pace-notes over the tricky military roads. Having overcome this after a couple of stages & beginning to set more competitive times, the pace began to tell on the Mini’s brakes, so much so that they disappeared altogether the end of Stage 4 (Dudlees 2), Andrew a bit perturbed when the pedal almost went through the bulkhead! Over 30 seconds subsequently being lost over the next 2 stages in order to ensure a safe return to the service area."

With only 20 minutes available at service, brakes were bled, fluid replaced & some semblance of stopping power restored. The remaining stages could now be tackled with more confidence & their times again began to improve.

By the finish of the event, they had held on to the Mini Sport Cup category 2 Class win and also claimed 2nd in class on the event itself. With Kevin adding, "It had been a challenging event over some truly unique roads & a result that had looked unlikely earlier in the day." 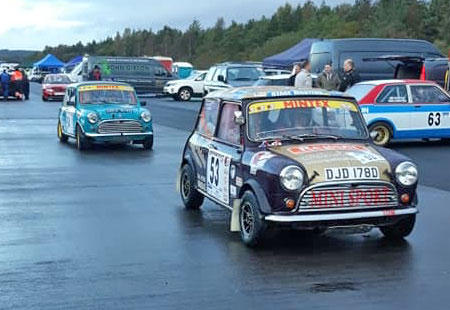 It was a solid performance for Peter Ellerby & Andy Brown, finishing 17 seconds ahead of Andrew & Kevin, to cinch 3rd in Cat 1 & 3rd Mini o/a. 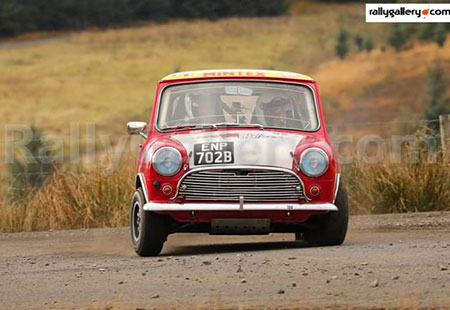 Current Championship leaders, Clive King & Anton Bird enjoyed a couple of nights with their fellow competitors & friends socialising, before completing the recce. Deciding that they would give a strong push on the first loop of 3 Stages to get in an early lead. With Clive telling us, "The first loop went well and we managed to pull 45 seconds on the 1st Stage & we were quickest on the 2nd & 3rd Stages as well. The Mini didn't need anything doing to it & was running fantastic,  with the Mini Sport engine pulling 7500 in top gear in places! The 2nd loop was a repeat of the first and again we managed to pull time from the other guys to finish with a substantial lead into the lunch halt. The final stages were really  fast in places but the car ran faultless & even on the the last 2 where we backed off a little to ensure a finish..."

Clive & Anton finished 1st in Cat 1 & 1st Mini o/a.
Another brutal rally completed sets our crews up for the next round on Anglesey in November for the final round of the 2021 Championship!

The Yokohama prize of two regulation tyres, used throughout the Championship, was awarded to Shane Gamble, Andrew O'Hanlon won the 5L of Penrite Classic Mini Oil & the Questmead prize for best improvement on seeding was awarded to Harvey Stevens, with Clive King winning the Snap-On Prize!

Although the 2021 HRCR Mini Sport Cup has been much shorted due to the on-going pandemic, we are hopeful of a full 2022 rallying schedule! Stay up to date will our rally calendar on the HRCR website here.

Full results from the Cheviot Stages Rally can be found on here.
To catch up with the 2021 Mini Sport Cup so far, please see here.
For more information on the Mini Sport Cup, please see our Facebook page here.