Quality Parts for LESS... Unbeatable prices on all our products! Keeping motoring affordable.

As Mini specialists, we owe our profession to those who made this wonderful car brand a worldwide success. So with the 18th November being the birth date of Alec Issigonis, the designer of the original Mini, we’re going to take a look back at his life and career, summing up his contribution to the Mini.

Ever since the Mini’s heyday in the 1960’s, the team here at Mini Sport have been helping to supply fellow enthusiasts with parts and spares to repair or to restore their cars. As time has progressed, we have grown and developed into one of the leading Mini specialists around; creating our own parts to match the originals, even as time has seen production cease on the ‘Classic’ Mini.

Even today, the classic Mini is still inspiring drivers of all ages to experience the uniqueness of this timeless British icon; either as an everyday runner or in competitive racing. So without further ado, let’s go back to where it all started. The life and career of Alec Issigonis... 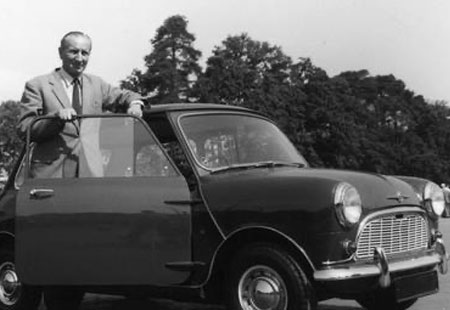 Born in 1906 into the Greek community of Smyma (then part of the Ottoman Empire, now modern-day Izmir, Turkey), Alec Issigonis was the son of Greek and German parents. Alec inherited British citizenship via his father, Constantine, who himself inherited it from his own father. Demosthenis Issigonis was a Greek engineer who in the 1830’s, worked for the British-owned Smyrna-Aydin Railway, acquiring British nationality that allowed him to send his son to study in England. Constantine’s time in England had a profound impact and through him, his own son was said to develop ‘very English attitudes’ (a manner that would figure greatly in the future cars he would later design and his Mini specialists, created).

In 1922, through defeat in the First World War, the Ottoman Empire was effectively over – the collapse requiring the partitioning of land between Greek and Turkish ethnic groups. Rising tensions, caused by disagreements over territory sparked the Greco-Turkish War and in September, Alec and his family were amongst thousands of British citizens who were evacuated to Malta by the Royal Navy and Marines.

Later that year, Constantine passed away and in 1923, Alec and his mother moved to London, with Alec studying engineering at Battersea Polytechnic. He would fail his mathematics exams three times and reportedly said that the subject was ‘the enemy of every creative genius’. He later entered the University of London’s External Programme to complete his education.

Early Career As A Car Designer and Engineer

Moving (or more aptly, driving) into the motor industry as a designer and engineer, Alec’s first job was for Humber, who experienced success in motor racing during the 1930’s and ‘40’s. One of his first innovations was to fit a front axle of his own design onto an Austin Seven, which caught the attentions of the brand and led to them offering him a job. After radically reimagining his customisation on the Austin, which included a suspension system with a trailing arm for the front, attached to a steel-cross member and swing axle rear, he moved to Morris Motors. 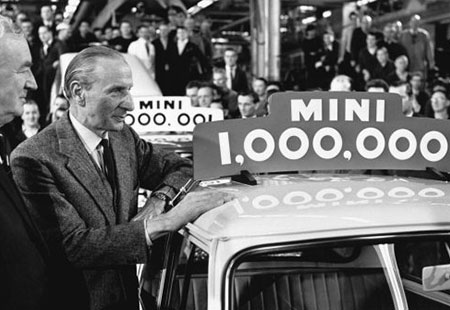 His suspension design helped to make a car lighter and this attribute helped the vehicles he worked on to compete well above their perceived abilities. His own car, fitted with a 750cc engine, was able to win both sprint and circuit events at 1100cc. Impressed by the design, Morris commissioned Alec to work on a new suspension system for the Morris 10. The outbreak of the Second World War prevented the design from being produced, so it was used later on the MG Y-type.

Throughout the war, he worked on various projects for the company and towards war’s end, started work on an ‘advanced car’ that was given the codename Mosquito – the Morris Minor. Produced from 1948 to 1971, the Morris Minor became the first British-made car to sell over one million units and has been held up as a classic example of great automotive design, typifying ‘Englishness’.

In 1952, Morris and Austin would merge to become the British Motor Corporation (BMC) – but by the time they joined forces, Alec had moved on to Alvis Cars to design an advanced saloon that included an all-aluminium V8 engine. His designs also included an experimental suspension system that was interconnected and independent – the prototype was not manufactured by Alvis as the cost to produce it was beyond their resources.

By now a big name in the motor industry, Alec was recruited ‘back’ by the BMC to work at the Austin plant in Longbridge. Personally headhunted by company chairman, Sir Leonard Lord, Alec’s task was to design a new model family of three cars – a large, comfortable car, a medium-sized family car and a small town car. Throughout 1956, Alec concentrated on the two larger cars and produced a number of prototypes for testing. However, the whole motor industry was about to rethink the way they designed cars in a massive (or smaller) way...

The Birth of The Mini 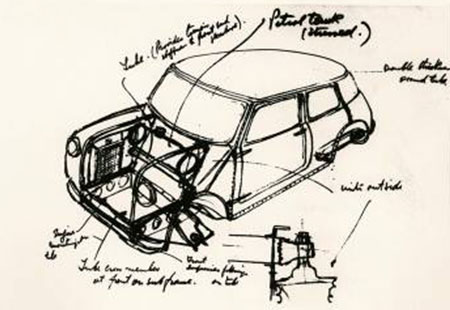 By the end of 1956, the nationalisation of the Suez Canal in Egypt, a major route for fuel transportation, sparked a crisis that saw petrol rationed in Britain. With need outstripping availability, costs of fuel rose and very quickly, sales of cars fell – so the industry needed to think about new designs that would make fuel last for longer.

Another reason for British manufacturers to think outside the box with the design of new models was because of the growing number of imported cars on the roads – although relatively rare, Italian Fiat’s and ‘bubble cars’ from Germany were making inroads in the market.

This all led to Leonard Lord ordering Alec to bring forward the production of the planned smaller ‘town car’ as quickly as possible. Using a front wheel drive, transverse engine, sump gearbox and 10-inch wheels – all contained in a 10ft-long, 4ft-wide frame – the design allowed for phenomenal space efficiency (as well as a great driving experience). The Mini was born – and would go on to sell over 5.3 million cars, creating generations of Mini specialists.

The Mini Cooper: A Racing Icon

Whilst the Mini’s popularity was all thanks to its economical design – meaning that a larger proportion of the population would be able to afford to run one – its place in history as a ‘cool icon’ was sealed by its motor racing success. 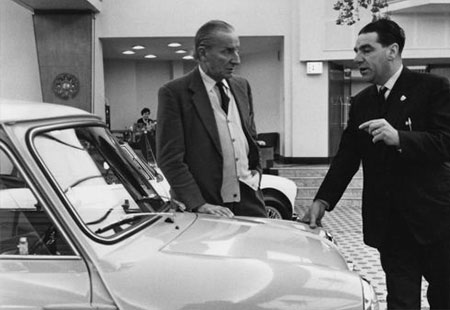 For many people, the term ‘Mini Cooper’ is interchangeable with ‘the Mini’; its sleek design, comfortable steering and nippy drive proving instantly popular. Alec was friends with John Cooper, the owner of the Cooper Car Company and designer/builder of some of the best Formula One and rally cars of the time. Seeing the potential of the Mini for racing competition, John worked with BMC, Alec and his team of Mini specialists to create a new design, that chiefly saw the 848cc engine upgraded to a 997cc. Twin SU carburettors, a closer-ratio gearbox and front disc brakes (that were uncommon in small cars at the time) were also added.

The release of the Cooper S model in 1964 was arguably the pinnacle of the brand; an even-sportier version of the original, the Cooper S had an engine with a stroke of 1071cc and would help its drivers to Monte Carlo Rally wins in 1964, ’65 and ’67. It soon became the car that anyone who was anyone would have; figures in fashion, music and film (all massive commodities for Britain in the 1960’s, of course) helped to promote the ‘coolness’ of the Mini Cooper and soon enough, the car was seen on roads across the UK and the Commonwealth.

Well-liked by his contemporaries (earning the nickname of ‘the Greek god’) Alec worked on numerous other car designs after the Mini. These included the Morris 1100 (with a version of his interconnected suspension system that was too costly for Alvis to produce), the Austin 1800 and the Austin Maxi, the last car designed by BMC (before the company was incorporated into British Leyland) and subsequently, the last to be designed by Alec Issigonis. 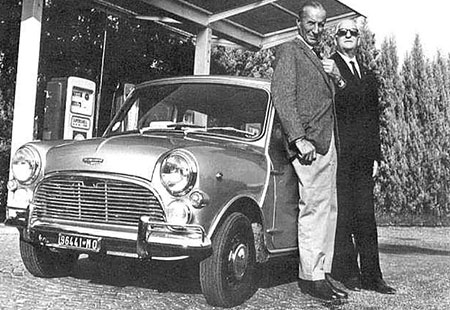 With design costs crippling the BMC, the takeover by British Leyland in 1969 saw a new approach taken – Alec was effectively ‘sidelined’ to a ‘Special Developments Director’ role. He stayed with the company until 1971 before retiring – but this did not stop him from working completely. In 1964, he was awarded a CBE in the Queen’s Birthday Honours List for his service to the British motor industry and in 1969, he was appointed a Knight Bachelor, gaining the title Sir.

Sir Alec Issigonis passed away on 2nd October 1988, leaving behind a lasting legacy that is still very much a fixture on Britain’s roads and racing events. From the most dedicated Mini specialists to the teenager starting out on their driving journeys; everyone knows about the Mini and its ability to achieve so much despite its size – a reputation that will continue far into the future.